If you ever played Theme Hospital as a kid (or even as an adult), I’d hazard a guess that you were somewhere between ‘reasonably’ and – if you’re anything like me – ’embarrassingly’ excited when Two Point Hospital was announced earlier this year.

The spiritual successor to the original 1997 game released last week to resounding approval and enthusiasm, and has since been hailed by Eurogamer as a ‘pitch perfect retread’ of the much-loved hospital sim. To be a worthy successor of Bullfrog’s Theme Hospital means only one thing – it has to be downright ridiculous.

Outlandish, farfetched, and hilariously literal illnesses were at the core of Theme Hospital‘s noteworthiness as a management sim. Without them, the trials and tribulations of running an A&E department probably wouldn’t have seemed so lighthearted. Watching on as your GPs examined an invisible man (who was little more than a top hat and walking stick) made for hours of addictive fun. Likewise, observing a man diagnosed with ‘Bloaty Head’ having his head popped and re-inflated brought about a small joy that any dose of realism would have promptly, and horrifyingly, squashed.

With that, let’s take a look at seven of Two Point Hospital’s quirkiest illnesses. 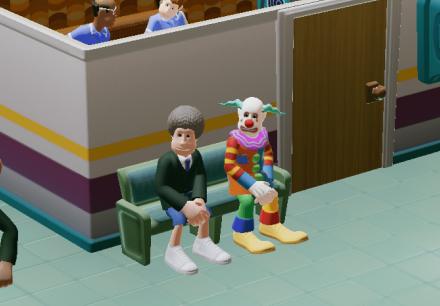 A personality disorder causing high jinks and general buffoonery. Escaped clowns must have their sense of humour completely excised to prevent a future relapse.

At some point, your hospital will definitely be overrun with Jest Infection sufferers, and you will definitely know about it – because they’re all dressed like clowns, if that wasn’t already apparent.

Fun fact: The name for this illness was decided via a ‘Name the Clown Illness‘ competition, and was announced by Two Point Studios at E3 this year.

Extreme hair growth caused by excessive consumption of both highbrow and lowbrow entertainment. The monobrow must be carefully removed and placed in a secure container to prevent it from escaping.

You heard it here first. Apparently, having a monobrow requires a lot of bed-rest.

A bunch of sad-looking greyscale people will mope around your hospital until you can restore them to their former, multi-coloured glory. I’d be pretty sad too.

Involuntary attachment to kitchen utensils, caused by extremely low levels of culinary skill. The pan must be carefully removed with a massive magnet. 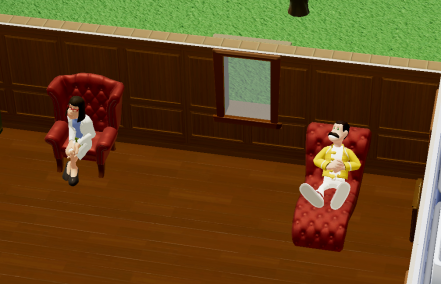 Patients believe themselves to be one of the greatest rockstars the world has ever seen, but are sadly ga ga.

So, if I want to dress up as Freddie Mercury and boogie my way around a hospital, I need a psychiatrist? That’s news to me.

A psychiatric condition that causes the sufferer to perceive things that don’t exist, usually boxes within which they are trapped.

These guys seem to always be perceiving an extremely strong wind – and yet, their berets remain perfectly in place. It’s a medical marvel.

Sufferers exhibit dangerously low levels of pixel density and an unhealthy longing for the recent past. Caused by bytes from low-res spiders.

These patients may seem like a blast from the past, but the fact is, they are not having a blast at all.

And there you have it – seven of Two Point Hospital’s quirkiest illnesses. These don’t even scratch the surface of what the game has to offer, but they’re certainly a good place to start.

What are your favourite illnesses in the game? Let us know in the comments, or tweet us at @indiehubco.